This is a huge, imposing Victorian structure near where I used to live. It's on the road between my childhood home and the coast at Irvine so I passed it often in my early biking days. Called Crofthead Mills, but known as the Neilston Mill by locals it was constructed in 1881 and replaced an earlier mill on the site that burned down. This is the only remaining mill of many that sat in the valley of the River Levern (or Levern Burn as it's known) At one time it was the largest thread producing mill in Britain and part of the textile industry that dominated this area. The mill closed in 1992 and now seems to used for storage of some kind. A company renting skips operates on the premises.

The mill seems out of proportion to the small town of Neilston. It does not dominate the town, however, since the town is located above the valley that the mill looks on to.

The building is whitewashed brick and though a bit shabby it appears to be in good condition. 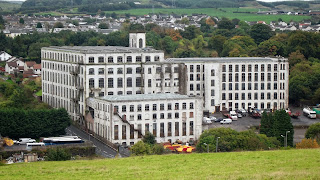 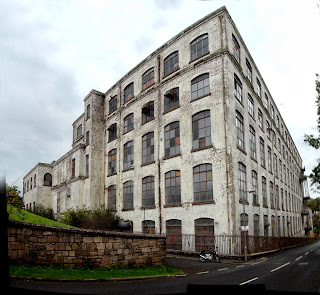 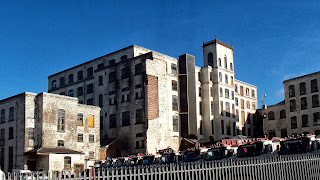